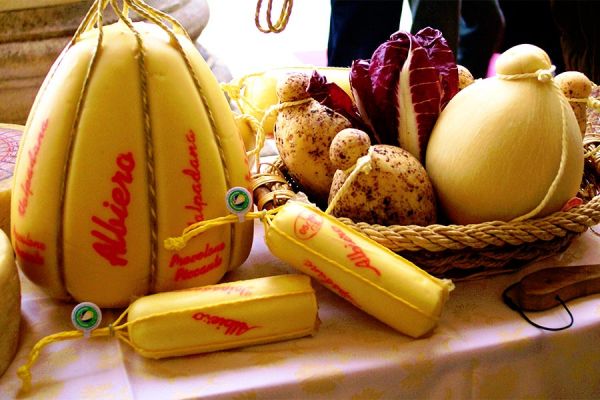 Provolone Valpadana PDO is a stringy semi-hard cheese produced in the typologies Dolce (sweet) and Piccante (piquant), with whole cow’s milk obtained exclusively from the terroir of origin.

Whey serum prepared in same processing environment is added to the milk.
For the production of Provolone Valpadana PDO Dolce, liquid calf rennet is added during the curdling process, whereas powdered lamb and/or kid rennet is used for the Piquant typology. Once the right consistency has been reached, the curd is broken mechanically and then agitated in order to stimulate the purging of the whey.
The temperature of the boiler is increased, and at the end of the process the mass is poured onto special tables for acidification and draining, in this way favouring the cooking of the curd. The cheese is then reheated, after which it is either pulled out into strings and shaped manually or placed in molds, depending on the desired shape.
Once shaped, the cheese is salted in brine for a period varying from a few hours to 30 days, depending on the weight of the cheese.
The ripening period is calculated according to the weight: at least 10 days for the smaller forms; at least 30 days for the medium forms; a minimum of 90 days for the large forms and the Piquant cheese. Some cheeses are also smoked.

Provolone Valpadana PDO can be cylindrical or have the shape of a salami, melon or pear, and at times it can have a spherical “head”.
The rind is thin and smooth and the colour varies from pale yellow to golden or brown.
The cheese is compact, with the possible presence of eyes, and straw yellow in colour.
The sweet cheese has a delicate flavour, which is more pronounced in the piquant typology.

Provolone Valpadana PDO should be kept in a cool place or in the least cold compartment of the fridge, at a temperature of 4°C.
Provolone Valpadana PDO is an optimum table cheese, but it can also be used as an ingredient in many different dishes.
The Sweet cheese is ideal when diced and added to salads or appetizers.
It pairs extremely well with pears, nuts and bread, or on its own dressed with salt, pepper, extra virgin olive oil and aromatic herbs.
The Piquant cheese can be accompanied by curls of fresh butter; it appears in many recipes, from savoury flans and soufflés, to meat or fish-based dishes.

The product is marketed year-round in the Provolone Valpadana PDO Dolce and Piccante typologies.
Both types can also be smoked. It is sold whole (sausage, melon, cylinder or pear-shaped), in slices, large pieces and pre-packed.
The forms must have the metallic seal (cockade), attached on strings or on the cheese itself.

The spinning of Provolone Valpadana PDO represents a crucial moment of processing: the ribbons are obtained with an expert movement of the hands, and they are then wrapped around themselves before being shaped in such a way that pockets of air don’t appear.

The origins of Provolone Valpadana PDO date back to the time of the Unification of Italy, when the dairy culture of stringy cheeses, which originated in Southern Italy, spread throughout the Padana Valley.
The name Provolone was first officially used in the Vocabolario di agricoltura by Canevazzi-Mancini in 1871,
in which it was defined as a large-sized provola (typical fresh stringy cheese from Southern Italy).

The production area of Provolone Valpadana PDO is within the territory of the provinces of Cremona, Brescia, and in a few municipalities in the provinces of Bergamo, Mantua and Lodi in the Lombardy region; Verona, Vicenza, Padua and Rovigo in the Veneto region; several municipalities in the autonomous Province of Trento in the Trentino Alto Adige region; Piacenza in the Emilia-Romagna region.