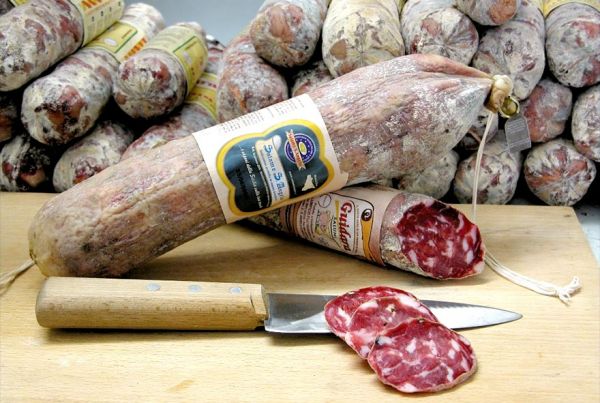 Salame S. Angelo PGI is a large-grained stuffed charcuterie product, obtained through the processing of prestigious cuts originating from pigs belonging to the Italian Large White,
Landrace and Duroc breeds or other similar breeds compatible with the Italian heavy pig.

The quality parts of the pig selected for processing are: leg, shoulder, fillet, loin, coppa and underbelly (cleaned).
The meat and fat are cut by hand using the “tip of the knife” method or with the use of a dicing machine that has molds with 12 mm square holes.
The meat is then mixed with sea salt and black pepper. The fat quantity of the mixture must not exceed 20% and the use of lard is not permitted.
The mixture is then inserted into pork casings and tied with string.
Curing takes place in rooms that are ventilated with external air and lasts for various periods of time depending on the typology (minimum 30, 50 or 60 days).
Manual pressure is applied to the product to establish the level of curing.

Salame S. Angelo PGI has a cylindrical shape and an irregular surface with a whitish coating.
The weight varies from 200 to 3,500 g depending on the typology. The consistency is soft and compact; it has a ruby-red colour with well-distributed grains of white fat.
The taste is slightly spicy, while the aroma is fragrant, sweet and characteristic. The slice is compact and homogeneous with the fat and lean parts well integrated.

Salame S. Angelo PGI must be kept in a cool place or in the fridge. It is advisable to put it into a sealed container or a cloth.
It should be cut it into thick slices, eliminating the natural casing that covers it.
In order to appreciate its characteristic flavour and fragrance, it should be eaten shortly after slicing.
It can be served on its own or as a starter with olives and vegetables in oil, cheese and bread, paired with a well-structured red wine.

The product is marketed as Salame S. Angelo PGI. Based on the length of the curing process, weight and type of casing used,
it is sold year-round in the following typologies: Cularino, Sottocularino, Sacco and Fellata.
It is sold whole, in pieces or sliced, unpackaged, vacuum- packed or in modified atmosphere packaging.

As Salame S. Angelo PGI is obtained from prime pork cuts, it is often defined as being “ham in the shape of salami”.
It is said that that the best slices come from the external part of the product.

Salame S. Angelo PGI takes its name from the town where it is produced.
Its history has been documented since the Arab-Norman period. During the XI century, the Normans introduced new customs to the Sicilian territory, including the use of pork, in contrast to the habits established by the Arabian dominators, who prohibited the use of pig meat. Over time, Sant’Angelo has been the jealous guardian of a unique Sicilian tradition. This is confirmed by many important historic documents, among which, a resolution adopted in the mid XIX century, which established a tax on products with the highest economic interest; salami was one of these products.
At about the same time, the Rivelo was introduced, which was similar to today’s self-certification.
It established that producers had to declare both the area where the salami was conserved and the amount produced.

The production area of Salame S. Angelo PGI is within the territory of the Municipality of Sant’Angelo di Brolo in the Province of Messina, in the Sicily region.