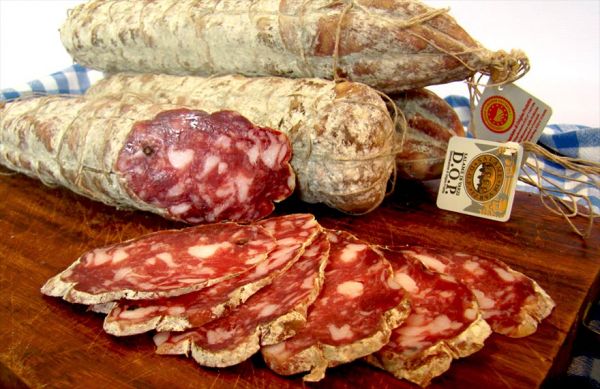 Salame di Varzi PDO is a large-grained stuffed charcuterie product, obtained through the processing of lean meat and fat from animals that can be identified as Italian heavy pigs.

The following cuts of lean meat are used: shoulder, thigh, loin, fillet and coppa, cleaned of sinews and fats.
The fat used is taken exclusively from the cheek, shoulder, belly, loin or lard. For every 100 kg of lean cuts, a maximum of 30% fatty cuts can be added.
The meat is minced in machines, with variable holes in relation to the diameter of the salami that is to be made, and seasoned with a salting mixture of salt, pepper, spices and an infusion of garlic in wine. The salami paste is inserted into a natural pig casing, perforated and tied with close-knit string.
Salami with a diameter of up to 50 mm and a maximum weight of 0,5 kg can be tied with a single string instead of a net.
Drying is an important procedure because it initiates the natural process of slow acidification and successively drying; it lasts for 7-8 days.
Curing takes place in the characteristic and ancient Varzi cellars. This process lasts for between 45-180 days, depending on the form of product.

Salame di Varzi PDO has a cylindrical shape and weighs between 100 g and 2 kg, at times even more; it has a soft consistency.
The slice has a rich red colour, broken up by the white of the fat. It has a sweet delicate flavour with a characteristic and fragrant aroma that is influenced by the period of curing.

If sliced, Salame di Varzi PDO must be kept in the fridge in a sealed packet and consumed as soon as possible.
It is best to slice it shortly before serving. As taught by tradition, the cut of the slice must be slanting, “in the form of a clarinet beak”, in order to obtain a characteristic ‘not round’ shape with a good thickness.
It can be eaten on its own or with vegetables conserved in oil, cheeses and fresh fruit.

The product is marketed as Salame di Varzi PDO. Based on the curing process and diameter it is sold in the following typologies: Filzetta, Filzettone, Sottocrespone a Budello Semplice, Cucito a Budello Doppio and Torto or Salametto.
It is sold in single pieces, vacuum-packed or in modified atmosphere packaging, whole, in pieces or sliced.

The particular characteristics of Salame di Varzi PDO are given to the micro-climate of the production area.
The presence of the River Staffora, the sea wind arriving from the nearby Liguria region, and the fresh air currents that blow into the valley from the surrounding mountains, create ideal conditions for the curing of salami products.

Salame di Varzi PDO has ancient origins. It seems that the Longobards diffused the technique of stuffing pig casings with pork, which up until that time was unknown.
This nomadic tribe needed a product that could be preserved for a long period of time due their lifestyle. In the XIII century,
the Marquis Malaspina presented it to his guests as an exceptionally delicious dish. Later, merchants took this salami to the markets of Europe, using the Via del Sale which connected the Padan Plain with the sea. It is also certain, as well as documented, that over the following centuries, salami was part of the frugal meals of humble peasants.

The production area of Salame di Varzi PDO is within the territory of 15 municipalities in the mountain area of Oltrepò Pavese in the Province of Pavia, in the Lombardy region.
The pigs used for production must be reared and slaughtered in the following regions: Lombardy, Piedmont and Emilia-Romagna.