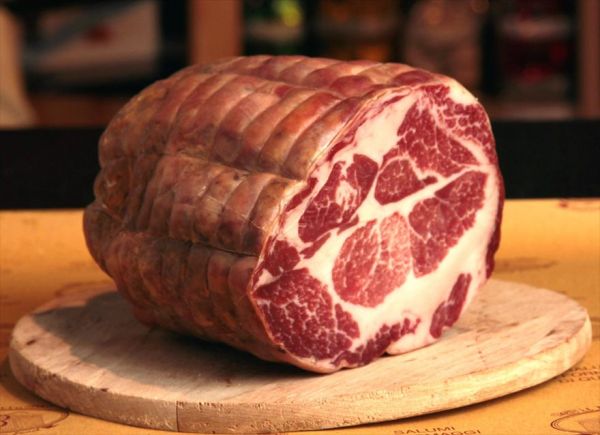 Coppa Piacentina PDO is a cured charcuterie product made with the neck muscles of the Large White, Landrace Italiana and Duroc pig breeds.

The neck muscle must be isolated immediately after slaughtering and transported to the processing plant in refrigerated vehicles within 72 hours;
it is then trimmed and the blood is drained. During the dry salting process, the muscle is massaged with a mix of salt and spices and subsequently placed in a cool environment for at least seven days. The product is then wrapped in pig diaphragm, tied with string and pierced before being placed in special drying rooms at a temperature of between 15- 25°C. The curing process takes place in environments with a temperature of between 10-20°C and a relative humidity of 70-90%. Curing lasts for a minimum period of six months, commencing from when the product was salted, and can also include a period of time in cellars, on the condition that they are monitored.

Coppa Piacentina PDO has a cylindrical shape with slightly thinner ends and a compact and inelastic consistency.
When cut, the slices should be uniform, with a bright red colour alternated with pinkish-white fat.
It has a sweet and delicate flavour that becomes stronger over time.

The best way to preserve Coppa Piacentina PDO is to remove the external gut, wrap the product in a wet cloth and keep it in the fridge.
In order to obtain a compact slice and fully savour the aromas of the product, it is best to cut the Coppa while it is still cold, or at a temperature of at least 10°C.
It is ideal as an entrée – served with other charcuterie products and cheeses, as well with butter and melon - but it can also be used as an ingredient in the preparation of main dishes or starters such as “risotto alla Coppa Piacentina PDO”, oven-baked crepes or timbales.
Coppa Piacentina PDO is best served with PDO wines produced in the hills of Piacenza.

The product is marketed as Coppa Piacentina PDO. It is sold whole, in pieces or slices, unpackaged, vacuum-packed or in modified atmosphere packaging.

The excellent quality of Coppa Piacentina PDO is strongly influenced by the curing process, no less than six months, which results in a full yet sweet flavour with a delicate and subtle fragrance.

The first traces of pig farming in the production area of Coppa Piacentina PDO date back to one millennium B.C. Evidence was subsequently found in Roman civilization, with archaeological finds such as a bronze talisman-pendant showing a small pig. Depictions of this animal can be found in the Abbey of San Colombano a Bobbio, in Val Trebbia, where it is possible to admire a mosaic from the XII century, portraying the “sacred” rite of pig slaughtering. At the beginning of the XV century, Milan and Lombardy tradesmen were already able to distinguish Piacenza charcuterie from those coming from other places within the Po valley, qualifying them as
“stuff from Piacenza”. Subsequently, in the first decades of the XVIII century, Piacenza charcuterie were also appreciated in elite French and Spanish environments, thanks to a skilful diplomat from Piacenza, Cardinal Giulio Alberoni.

The production and processing area of Coppa Piacentina PDO is within the entire territory of the Province of Piacenza, in the Emilia-Romagna region.
The pigs used for production must be born, reared and slaughtered in the regions of Lombardy and Emilia- Romagna.