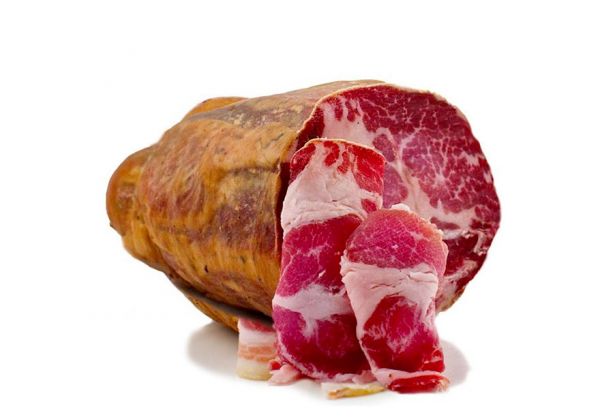 Capocollo di Calabria PDO is a salty cured charcuterie product obtained through the processing of the upper part of the loin of traditional large-sized swine, belonging to the Calabrese, Large White or Landrace Italiana breeds and reared in Calabria.

Once selected and deboned, the meat cuts of 3,5 - 5,5 kg are dry salted or salted in brine using cooking salt.
This process can last from 4-10 days and is followed by washing, rubbing with wine vinegar and machine pressing with the addition of black pepper grains.
The product is then wrapped in fresh pigskin, hand-tied in the traditional way using natural string, and then the skin is pierced; during this stage,
the use of characteristic sticks is permitted. The Capocollo is hung to drip in well-ventilated rooms, with controlled relative humidity and temperature.
The curing process must last at least 100 days, commencing from the day of salting, and must also take place in temperature controlled environments (14-16°C).

Capocollo di Calabria PDO is traditionally kept hanging from the ceiling in cool dry areas, where it can be kept for up to 12 months.
Once sliced it should be put in the fridge. It is eaten in thin slices or diced and is typically consumed as an appetizer or snack, with traditional local bread that is naturally leavened and cooked in a wood-burning oven.
It has an intense yet delicate flavour and is ideal to serve with well-structured red wines.

The product is marketed as Capocollo di Calabria PDO. It is sold whole, in pieces or slices, unpackaged, vacuum-packed or in modified atmosphere packaging.

The meat cut selected for the processing of Capocollo di Calabria PDO should have a fat layer of approximately 3-4 mm, in order to maintain its tenderness during the curing process and to improve its organoleptic characteristics.

The origins of Capocollo di Calabria PDO can be found in the history of charcuterie production in Calabria, most likely dating back to the period of Magna Graecia.
The first documentation on the processing of pig meat can be found in a text from 1691, Della Calabria Illustrata, in which Padre Giovanni Fiore da Cropani cited that among the salted meats were those transformed “into Lards, Sausages, Brawn and similar”.
Later on (1806- 1815), the Statistica Murattiana registered sausage production, documenting the “preference for salted pork, which is produced in both Calabria regions.
Salt and pepper are generally what people choose to spoil this sought-after delicacy”. In the third section, dedicated to the “subsistence and conservation of populations”, pork is indicted as being “the only meat that is salted in every district”. Over time, Calabria has remained one of the few regions where the pork culture is still deeply rooted.

The production area of Capocollo di Calabria PDO is within the entire territory of the Calabria region.
The pigs used for production must have been born in the regions of Calabria, Basilicata, Sicily, Apulia and Campania, and reared in the
Calabria region from a maximum age of four months; they are processed in Calabria.