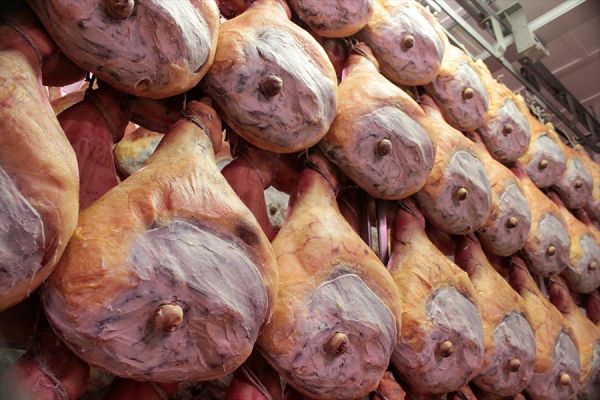 Prosciutto di Norcia PGI is a raw and cured charcuterie product, obtained through the processing of fresh legs of heavy pigs generally belonging to the offspring of Large White and Italian Landrace, Duroc or other breeds considered compatible with the Italian heavy pig.

After slaughtering, the legs are refrigerated for 24 hours before being trimmed to form “squares”.
The legs are salted twice, using medium-grained sea salt, after which they are desalted and left to rest for two and a half months.
Before curing, the legs of ham are washed, dried and greased, which involves the exposed surfaces being covered with a paste of pork fat and rice flour.
The curing process takes place in rooms equipped to allow for sufficient exchange of air.
The curing process, from salting to the product being made available for consumption, cannot last less than 12 months; for larger legs the minimum period is 18 months.
At the end of the curing period, the hams which are considered to be of the right quality are fire-branded with the name “Prosciutto di Norcia”.

Prosciutto di Norcia PGI has a characteristic rounded pear shape and no trotter. The weight is usually no less than 8,5 kg.
On slicing, it is pinkish to red in colour, with a savoury yet not salty flavour. The fragrance is characteristic and slightly spicy due to the presence of a small amount of pepper.

Whole Prosciutto di Norcia PGI should be kept in a cool dry place, greasing the cut surface with a bit of oil and covering it with cling film or aluminum foil.
The ham should be sliced by hand shortly before serving. Once cut, it should be kept in the fridge. Prosciutto di Norcia PGI has a delicate taste and is best eaten in thin slices.
It can be served as an appetizer or main course, accompanied by other typical Umbrian products, especially cheeses, unsalted bread and several types of seasonal fresh fruits (kiwi and melon are particularly popular).
It should ideally be paired with full-bodied red wines from the region.

The product is marketed as Prosciutto di Norcia PGI. It is sold whole, in pieces or sliced and it can either be unpackaged or vacuum-packed.

During the curing process, the protein molecules are broken down into individual amino acids, making Prosciutto di Norcia PGI ideal for sportspersons and young children.

The origins of Prosciutto di Norcia PGI date back to the Roman age. In De Agri Cultura, which was compiled in around 160 B.C., Marco Porzio Catone, also known as the Censor, illustrated salting and preserving procedures that could be applied to hams produced in Norcia, in what could almost be considered a product specification.
In Nursine, the widespread breeding and characteristic pastoral farming of the area encouraged the conservation of pork, allowing the land to be used in a more rational and continuous way even in colder seasons.
Furthermore, during the periods of the Republic and the Roman Empire, these practices led to the promotion of a policy for the valorization of the land, which was later supported by the Papal States.
Over time, the farmers of this area became skilful and expert in the processing and conserving of pork, which was also sold salted and cured in neighbouring areas.

The production area of Prosciutto di Norcia PGI is within the municipalities of Norcia, Preci, Cascia, Monteleone di Spoleto and Poggiodomo, all of which are 500 m.a.s.l., in the Province of Perugia, in the Umbria region.