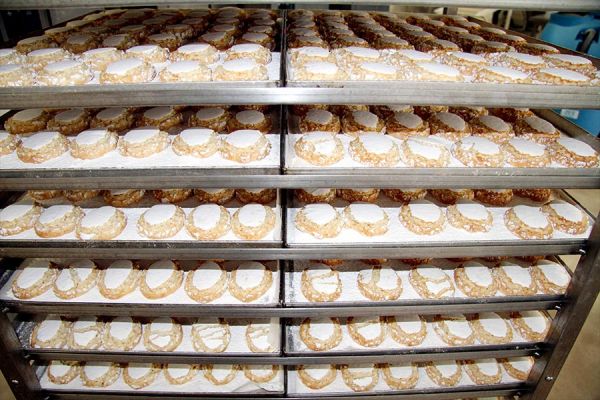 Ricciarelli di Siena PGI are a sweet oven-baked confectionery product obtained through the processing of an oven-baked dough produced with carefully selected sweet and bitter almonds, sugar and egg white.

The dough is made with chopped sweet almonds, refined sugar, icing sugar, hen egg albumen and leavening agents. Other specific ingredients, used as a partial substitution or in addition to the basic ones, are permitted: bitter almonds, glucose syrup or invert sugar, Millefiori honey, aromas, vanilla pods or extract, citrus essential oils, almond essence, finely cut candied orange peel, starch (as a base) and sorbic acid. The addition of any other ingredients, additives colouring or preservatives is not allowed. The almonds used for the dough are identified through the determination of their DNA. The dough is subdivided mechanically or manually into portions, giving the product its characteristic lozenge oval shape, after which they are sprinkled abundantly with icing sugar and placed carefully on starch wafer paper, which remains until the product is made available for consumption. Baking takes place in preheated ovens at a temperature of between 150-200°C for 12-20 minutes. The product is then left to cool and packaged.

Ricciarelli di Siena PGI are characterised by their lozenge oval shape. The weight of each piece ranges from 10 to 30 g and the thickness from 13 to 20 mm. The surface is white due to the icing sugar, with the possible presence of cracks. The border is slightly golden in colour, while the main body is beige, with a light golden hue. Its consistency is very soft but not crumbly and it has a very sweet flavour and aroma, typical of almond paste.

Ricciarelli di Siena PGI should be kept in a cool, dry place so that their softness and fragrance remain unaltered. They are ideal served at the end of a meal with tea, coffee or sweet wines such as Vin Santo or Moscadello di Montalcino.

The product is marketed as Ricciarelli di Siena PGI. It is sold singly or multiply in hermetically sealed boxes. In the latter case, the single products must be on a transparent tray or shallow container, or in a honeycomb tray with a shape and size in proportion to the single pieces; the trays are wrapped in heat sealed transparent films and inserted into cardboard or metal boxes.

Ricciarelli di Siena PGI are characterised by their very soft consistency and white colour, which is given exclusively to the presence of sugar. They are completely free from flours or potato starch that could lower the quality level.

The origins of Ricciarelli di Siena PGI date back to the Middle Ages, when the Sienese imported marzipan, most likely from the East. In fact, the etymology of the word marzipan originates in the Orient: for some linguists it is derived from the Burmese city of Martaban; for others, it comes from the Arabian word mauthaban (the box where marzipan was stored). These biscuits were used as a donation to pay homage to someone. Niccolò Machiavelli himself told of how the Sienese offered “small marzipans” to a Papal legate visiting the city. The processing of “Siena Ricciarelli” took place in the convents or apothecaries, the only places in which the essential spices and aromas for preserving food could be found. In this period, they were known by the name marzapanetti alla senese or morzelletti, and it was only in the XIX century that they were given the designation ricciarelli.

Production Area
The production area of Ricciarelli di Siena PGI is within the entire administrative territory of the Province of Siena, in the Tuscany region.