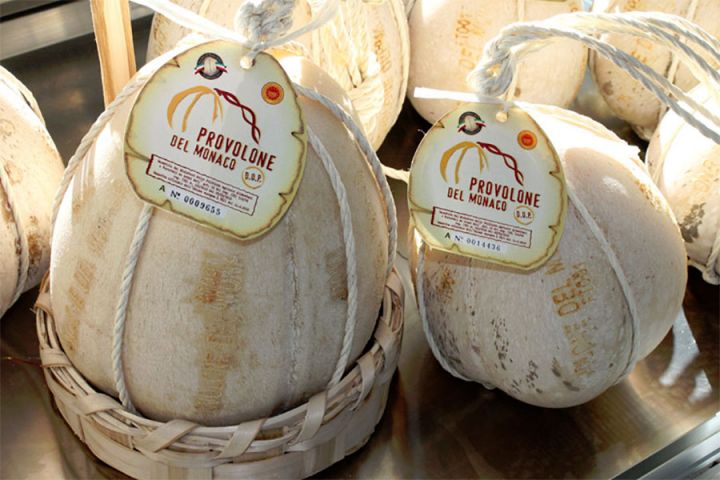 Provolone del Monaco PDO is a stringy semi-hard cheese, ripened and produced exclusively with raw cow’s milk, at least 20% of which is obtained from the Agerolese cattle and 80% from different breeds (Frisona, Brunalpina, Pezzata Rossa, Jersey, Podolica) raised exclusively in the production area.

The milk is curdled for 40-60 minutes, and then either kid rennet paste or natural liquid calf rennet is added.
Once the curd has reached the desired consistency, it is broken into grains the size of a corn kernel and left to rest for 20 minutes.
The curd is then heated to 48-52°C and left to rest for a further 30 minutes, after which it is removed from the whey and put in hemp cloths or holed baskets.
When the cheese is elastic enough, it is cut into strips of varying sizes and spun. The cheese is shaped by hand with the addition of water, at a temperature of 85-95°C. The forms are hardened in cold water and salted in brine, before being tied up in pairs and hung to dry fromappropriate scaffoldings for 10-20 days. The cheese is then left to ripen for at least six months in rooms with a temperature between 8°C and 15°C.
During this period, the cheeses are only washed and the mould is removed; it is also possible to brush the forms with Penisola Sorrentina PDO extra virgin olive oil.

The shape of Provolone del Monaco PDO is similar to a long melon, sub-divided into a minimum of six surfaces, with a variable weight of 2.5 to 8 kg.
The cheese is elastic, compact and uniform, with holes of up to 5 mm in diameter. The rind is thin and almost smooth, with a yellowish colour that presents slighter darker hues, tending more towards deep yellow when the cheese has been ripened for more than 7-8 months,also giving the cheese a more consistent texture. The flavour is sweet and buttery, with a pleasant piquant taste that becomes stronger with aging.

In order to conserve its organoleptic properties in the best way, Provolone del Monaco PDO should be kept in the fridge at a temperature of 8°C.
It is used as an ingredient to prepare many recipes from the Neapolitan cuisine, but its characteristic flavour also makes it highly appreciated as a table cheese.
It is perfect with red wine such as Penisola Sorrentina PDO, especially when the cheese is more mature.

The product is marketed as Provolone del Monaco PDO. It is sold year-round, whole or in portions.
It can be also vacuum-packed or in put in a protected atmosphere.

Provolone del Monaco PDO owes its unique organoleptic properties, consistency and elasticity to the exceptional quality of the milk obtained from the Agerolese breed, which produces a cheese that is particularly suitable for spinning.

The ancient origins of Provolone del Monaco PDO can be found in the dairy production of Monti Lattari and the Sorrentina Peninsula.
The origin of its name is linked to the history of how it was sold, when the need to find wider outlets pushed the farmers who produced this cheese to go to the market in the city of Naples. They went to the city by sea and generally wore a large mantel similar to a cowl, assuming an aspect that was reminiscent of monks. “Monaco” was the nickname given to them by the people at the port in order to identify them; therefore, the cheese that they transported was baptised “Provolone del Monaco”.

The production area of Provolone del Monaco PDO is within 13 municipalities in the Province of Naples, in the Campania region.