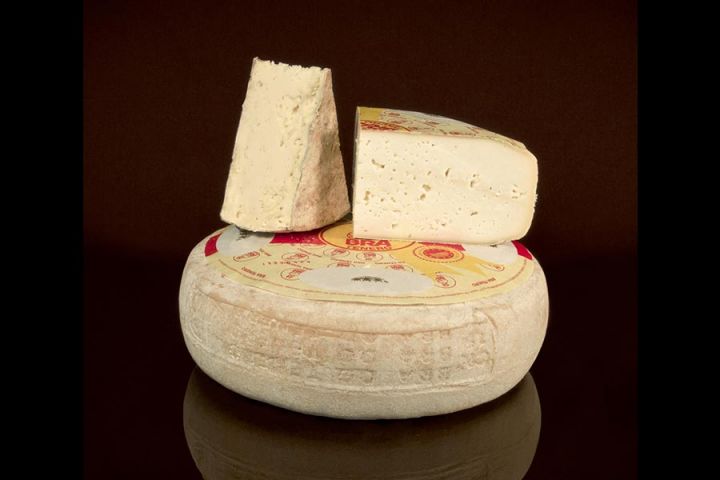 Bra PDO is a cheese produced with cow’s milk, at times skimmed, originating from cows raised in the Province of Cuneo, with the possible addition of goat’s and/or sheep’s milk. There are two typologies of Bra PDO: Tenero (soft) and Duro (hard).

Bra PDO Tenero is produced using milk obtained from a maximum of four daily milkings.
The milk is heat treated and then curdled with calf rennet.
It is curdled twice until the grains are about the size of a corn kernel for the Bra Tenero and the size of a rice grain for the Bra Duro.
It is then pre-pressed and set in molds. The cheese is salted twice, dry salting or brining, before the ripening process, lasting for a minimum of 45 days for the Bra Tenero and at least 180 days for the Bra Duro.
Both typologies can display the word “d’Alpeggio” on the label, on the condition that the cheese is produced and ripened in the mountain areas of the Province of Cuneo.

Bra PDO Tenero has an elastic rind and the cheese is white or ivory white; the flavour is pleasantly fragrant.
Bra PDO Duro has a hard rind, with a yellowish straw coloured cheese and a tasty and savoury aroma.

Bra PDO must be kept in a cool dry place and should be conserved in the least cold compartment if kept in the fridge.
Bra PDO Tenero is an excellent table cheese.
It is mainly used as an ingredient in the preparation of baked dishes, although it is an excellent product for using in salads.
It pairs well with young red Piedmont wines. Bra PDO Duro is a table cheese and is generally used for grating.
Due to its more pronounced flavour, it pairs perfectly with full-bodied red Piedmont wines.

The product is marketed as Bra PDO in the following typologies: Tenero and Duro, with the additional wording d’Alpeggio (green label).
It is sold fresh, mature, whole, in large pieces and in pre-packed slices.
The label must bear the stamp on one side and the product logo, designation and cheese factory number on the other.

Bra PDO d’Alpeggio is considered the most prestigious of the Bra cheeses on the market.
It is distinguished by its yellow-ochre colour, the compact consistency and its minute eyes; it has an intense savoury and piquant flavour.

Bra PDO takes its name from the locality of the same name in the Province of Cuneo: the provincial capital of the Roero district.
In the past, in fact, Bra was the main location for the ripening and trading of this cheese, which has been produced in the mountains since the XIV century.
Once upon a time, Bra cheese constituted one of the basic foods for the local alpine population; it was made by shepherds, also known as Malgari, who came down from the mountains with their flocks in Autumn to pass winter in the pastures of the Cuneo valley, returning in Spring and producing this mountain cheese. In 1371, the Braidesi Order applied a stale to cheese: two coins and two denari for the most expensive (Robiola), one coin for pinguis (un-ripened products, Bra included).
At the time, those who traded in Bra bought the hand-made cheese from the Malgari, and then ripened it in their own cellars before selling.

The production area of Bra PDO is within the entire territory of the Province of Cuneo and in the Municipality of Villafranca Piemonte in the Province of Turin, in the Piedmont region.