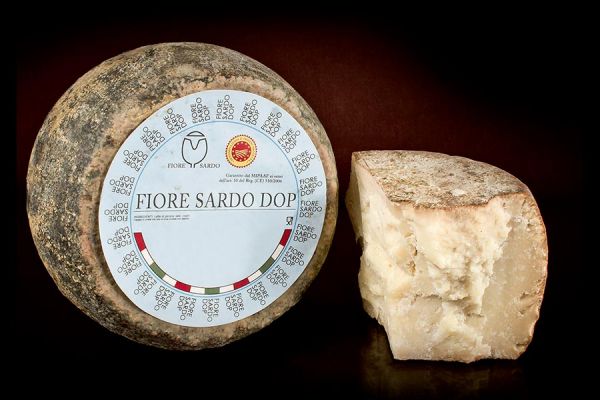 The milk, which is taken from two daily milkings or, in the summer season, one milking, is curdled in copper lapiolos (cauldrons) with lamb and/or kid rennet, at a temperature of 33-35°C.
The curd breaks for the first time after 23-27 minutes, and after several minutes resting in the cauldron; it is broken again and placed into its characteristic conical-shaped boxes.
In order to stimulate the purging of the whey, the cheese is kneaded by hand using traditional methods (piccàu and arremundàu).
In order to create a more resistant and smooth rind, the cheese is scalded with hot water before being salted in brine for 36-48 hours.
The cheese is then smoked for around 10-15 days with Mediterranean shrubs, after which, the form acquires its golden yellow colour.
Ripening takes place in cool, damp and well-aerated cellars and lasts for a minimum of three and a half months for table cheese and at least six months for grating cheese.
The mature product weighs between 3-4 kg. During the first months of ripening, greenish white and dark grey moulds forms on the rind, which indicate that ripening is proceeding as it should.
Furthermore, the rind acquires a brown or dark green colour. After it has reached a certain degree of ripeness, the cheese is basted with olive oil and constantly manipulated and turned.

Fiore Sardo PDO has a cylindrical shape, with a characteristic groppa di mulo (mule’s rump) edge.
The rind ranges from yellow to brown in colour depending on the level of ripening. The cheese is firm, white and without eyes.
The flavour is more or less piquant depending on the level of ripening.
It offers a hint of dried fruits and an aroma of grasses, which tends to assuage during the course of aging.

Fiore Sardo PDO, whole or sliced, is a product that keeps well for long periods of time, with no alteration in the flavour or consistency, even when kept outside of the fridge.
Fresh, it can be consumed as a table cheese or grated if it is mature.
In the former case, it is optimal cooked, fried, roasted and melted, accompanied by fresh fava beans or used as a filling in ravioli.
More mature Fiore Sardo PDO is delicious with roasted potatoes, sausages, fresh tomatoes and onions.
It can be grated over traditional Sardinian dishes such as pane frattau or on culurjones of fresh cheese with fresa bread.
It pairs well with Sardinian wines.

The product is marketed as Fiore Sardo PDO. It is sold year-round, fresh or mature, whole, in large pieces and in pre-packed slices. The form must carry the specific designation of origin mark.

In the past, the processing methods of Fiore Sardo PDO involved the use of a particular technique for heating the milk;
it was put in a cork container and heated through the introduction of hot stones from the fire.

The origins of this cheese precede the Roman conquest of Sardinia.
In more recent times, Fiore Sardo PDO was the only Sardinian cheese consumed in other parts of Italy. In the XIX century, they began to use it in the region of Liguria for the production of pesto sauce.
The origin of its name probably derives from the fact that a flower was imprinted on the conical-shaped chestnut wood box (pischeddas) in which, up until a few years ago, the cheese was placed to give it its shape.

The production area of Fiore Sardo PDO is within the entire territory of the autonomous region of Sardinia.