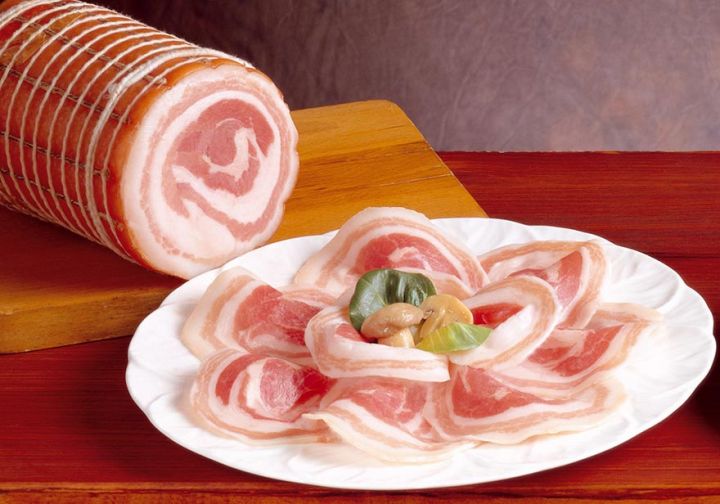 Pancetta Piacentina PDO is a charcuterie product obtained from the so-called pancettone, a fatty cut of pork.
The meat comes from the Italian Large White, Landrace and Duroc pig breeds or other similar breeds meeting the Italian heavy pig standards.

After the meat is selected, it is cut into squares, trimmed and left in the refrigerated cells until salting.
The bacon is dry salted by hand, using a mix of salt, pepper and spices.
The salted product is then left in a refrigerator for a minimum of ten days.
After being scraped, the bacon is rolled and tied, attaching natural pig casings at the ends of the roll or on the side seam; lean pork may be also be added. The product is dried and cured for a minimum period of four months, commencing from the salting date, in environments with temperatures ranging between 10 and 18°C and a humidity level of 70-90%. The production processes take place in areas that do not exceed an altitude of 900 m.

Pancetta Piacentina PDO has a cylindrical shape and weighs between 4 and 8 kg; the slice is bright red in the lean parts and white in the fat parts.
The meat has a pleasant and sweet fragrance. The slice is soft on the palate, tending to melt in the mouth thanks to the presence of the fat,
which also determines the delicate and remarkably mild characteristic savoury flavour.

The best way to preserve Pancetta Piacentina PDO is to keep it in the fridge, after having carefully washed the rind and wrapped it in a damp cloth.
Traditionally it is eaten raw as an entrée, either with other charcuterie products or served with broad beans or pecorino cheese.
It is also excellent cooked and is used as an ingredient in many outstanding recipes from the Italian gastronomy.

The product is marketed as Pancetta Piacentina PDO. It is sold whole, in pieces or sliced, unpackaged, vacuum-packed or in modified atmosphere packaging.

In contrast to other bacons, Pancetta Piacentina PDO is rolled, a characteristic that is evident in the cut slice which presents alternating circular layers.

The first traces of pig farming in the production area of Pancetta Piacentina PDO date back to one millennium B.C. Evidence was subsequently found in Roman civilization, with archaeological finds such as a bronze talisman-pendant showing a small pig.
Depictions of this animal can be found in the Abbey of San Colombano a Bobbio, in Val Trebbia, where it is possible to admire a mosaic from the XII century, portraying the “sacred” rite of pig slaughtering.
At the beginning of the XV century, Milan and Lombardy tradesmen were already able to distinguish Piacenza charcuterie from those coming from other places within the Po valley, qualifying them as “stuff from Piacenza”.
Subsequently, in the first decades of the XVIII century, Piacenza charcuterie were also appreciated in elite French and Spanish environments, thanks to a skilful diplomat from Piacenza, Cardinal Giulio Alberoni. During the last century, the local processing of meat began to take on a semi-industrial form, however, notwithstanding the passing of time and progress in technology, company’s continue to produce this product with traditional methods linked to customs passed down from generation to generation.

The production area of Pancetta Piacentina PDO is within the entire territory of the Province of Piacenza in the Emilia-Romagna region. The pigs used for processing have to be born, reared and slaughtered in the regions of Lombardy and Emilia-Romagna.