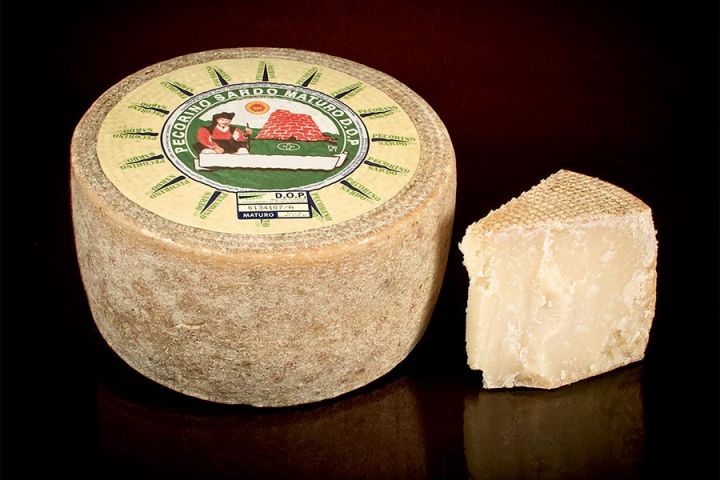 Pecorino Sardo PDO is a semi-cooked cheese produced with whole sheep’s milk obtained from animals belonging to the Sarda breed.
It is produced in two distinct typologies: Dolce (sweet) and Maturo (mature).

The whole sheep’s milk, originating exclusively from the immediate production area, can be heated or pasteurised. It is curdled with calf rennet at 35-38°C for 35-40 minutes. Once the curd is obtained, it is broken until the grains are the size of a walnut for the Sweet cheese, and the size of kermel corn for Mature Pecorino Sardo PDO.
The cheese is then semi-cooked, pressed, dry salted or salted in brine, and ripened.
The ripening stage has a different duration for the two types: the Sweet cheese is ripened for between 20 and 60 days; the Mature cheese for a minimum of 120 days. After this stage, the cheeses are naturally smoked.

Pecorino Sardo PDO has a cylindrical shape and flat surfaces, with a variable weight of 1 to 2.3 kg for the Dolce type and 1.7 to 4 kg for the Maturo type.
The colour of the cheese ranges from white to straw yellow, depending on how mature it is.
The consistency is compact with a few eyes, soft for the sweet cheese.
The rind is smooth and thin: white to straw yellow in colour for sweet cheese; dark yellow to brown for Maturo.
The Dolce type is sweet-fragrant or slightly sour, while the Mature cheese is stronger and pleasantly piquant.

Pecorino Sardo PDO has a long shelf life if the instructions on the label are followed, especially during hot weather.
The Dolce type is mainly consumed as a table cheese, served in flakes with fresh vegetables, or as a main dish with grapes and pears.
The Maturo type is best eaten at the end of a meal and is delicious when accompanied by bread, olive oil, and pine nuts, or grated to add flavour to pasta dishes.

The product is marketed as Pecorino Sardo PDO Dolce (ripened 20-60 days, blue label) or Pecorino Sardo PDO Maturo (ripened for at least 120 days, green label).
It is sold year-round, whole, in large pieces, and in pre-packed slices.
The cheese must bear the initials of its name in ink, the PDO seal and the identification box of the producing company; the label must be attached to the surface and bear the designation and product logo.

The full aromatic and unique flavour of Pecorino Sardo PDO comes from the unique characteristics of the milk of the Sardinian breed of sheep raised in the inland mountains of Sardinia, which are rich with aromatic vegetation.

Historical documentation regarding the different techniques used for cheese production in Sardinia dates back to the end of the XVIII century,
when cheeses were distinguished as being bianchi (white), fresa (milled), spianatu (level), rossi fini (fine red) and affumicati (smoked);
these last two categories can be considered the precursors to Pecorino Sardo PDO. The cheese was originally produced using very unique artisan techniques, such as the direct immersion of scorching rocks into the milk in order to heat it. At the beginning of the XX century, these techniques were displaced by more modern practices, such as the use of thermometers, the filtration of the milk and the use of machinery, guaranteeing improved hygiene in the transformation of milk into cheese. The production of this cheese continued to expand after the Second World War.

The production area of Pecorino Sardo PDO is within the entire territory of the Sardinia region.
History